The interiors and façades of many churches in Oaxaca are highly decorated and painted, but the term "painted church" is used to refer to a few of them, in particular.  In the 1990's Rodolfo Morales, an internationally-reknowned Oaxacan artist returned to Oaxaca and dedicated himself and his foundation, the Fundacion Rodolfo Morales, to the restoration of colonial churches in Oaxaca. His chief focus was the former Dominican church/convent in Ocotlan, but some smaller churches in the area, most notably Santa Ana Zegache a 17th century village church not far from Ocotlan, were a part of this work and will be discussed in a future post.

Ocotlan de Morelos is located about 22 miles outside of Oaxaca City and is a short taxi ride from there.  Ocotlan, is a Nahuatl word meaning "among the trees" and de Morelos, is in honor of a a Catholic priest who was a rebel leader in the Mexican War of
Independence. The church is called Santo Domingo because it was founded by friars of the Dominican order.


The construction of a church/convent was begun as early as 1555 in Ocotlan, but for various reasons construction was stopped and not begun again until the 16th century; the Dominican friars remained there until 1885. The very sturdy-looking church is built in the "Oaxacan Baroque" style, which was discussed in my post of 4/16/13. On the top niche in the façade is a statue of St. Dominic (Santo Domingo), shown with his dog and his rosary, two symbols of the Dominican Order.

The church's interior has been exquisitely re-painted using a more or less monochromatic palette reminiscent of the black habit (clothing) of the Dominican Order. As you can see in this detail from the dome, the Virgin Mary, holding a small image of Jesus, is dressed in the characteristic Dominican black and white.

The front altar of the church displays a number of saints,  including two Dominican saints (to the right) who wear the robes of the order.  Each religious order (Franciscan, Jesuit, Augustinian, Dominican and so on) displayed saints of their own order, in addition to the more general Christian saints, as a means of reinforcing their identity and authority.

In Santo Domingo there is an obvious contrast between the monochromatic austerity of the main sanctuary and its two intimate, smaller side chapels.  The main sanctuary is the public space, for masses and communal celebrations. The chapels, both of which seemed to be very holy places for the people praying there, appear to be where the local people go for personal prayer and devotion.  Guide-books do not offer information about them and my own guide made a point of bringing me there.  Although the decoration of the main church is what Santo Domingo is best known for, the atmosphere of the chapels was what was truly amazing.


The object in the white-draped sanctuary is a gold monstrance, the sunburst-shape vessel used to display the consecrated host, the piece of bread that is believed within the Catholic faith to become the body of Jesus during the Mass.  Adoration of the consecrated host is a major devotion throughout Latin America (and the rest of the Roman Catholic world as well).  However, in this chapel there seems to be something of a mystery about the object in the sanctuary. My guide told me that there had been something else there- something like a tree- that had been removed, he thought perhaps for repairs. He was unsure exactly had been there, but the sole framed picture on the wall of this chapel may offer some clues.


This picture, if you look closely, is also of a monstrance, but one fused with indigenous elements.  The green that is woven around gold sunburst is a maize plant, and maize (corn) was a central deity throughout pre-hispanic Mesoamerica and is still highly significant in modern times.  Additionally, we have to remember that the Sun, itself, was a major component of pre-hispanic religions. The circle of childrens' heads also had a prehispanic significance.  Although there is no proof, it seems quite possible that the object in the picture may have been the  missing object that had been the focus of adoration in the chapel.  If so, it was an object that had a depth of meaning to the worshippers of Ocotlan, the majority of whom are of Zapotec Indian origins and for whom the symbols, such as the maize plant, would have tremendous significance.
The second chapel in Santo Domingo Ocotlan is one dedicated to the Holy Child and it
also has its own sense of mystery with an atmosphere quite different from the austere majesty of the main sanctuary.

When I first read about the "Talking Cross", I imagined something very different from the reality. Although the Talking Cross is often presented as a unique event, the fact is  communicating objects, transmitting messages from the divine,  have a long Mayan history.  Just one instance was a talking idol in a sanctuary on the island of Cozumel powered by a human voice in a concealed chamber.  The Talking Cross that made its appearance  around 1850 in the eastern part of the Yucatan now known as Quintana Roo, during the Caste War (1847-1901) in which the Mayans rose up against the hispanic Mexican overlords,  both fits this model but is also unique.  Crosses themselves had a long Pre-columbian history in the Mayan world, representing the World Tree, the axis mundi that connected the sky, earth and underworld.

History of the "Talking" Cross:

As scholar Nelson Reed pointed out in his classic book, "The Caste War of the Yucatan", it is during times of extreme cultural stress that prophets arise.  In 1850 the Mayans were losing the war and their religious structure was falling apart because, in the process of expelling all of Spanish heritage, they also lost their priests with their santos (images/statues of saints).    Despite resistance to the Spanish, Catholicism and its trappings had over time become an entrenched part of the Mayan cosmic order and ritual life, the things that kept their world and harvest on track.   It was at this time of loss and change that Juan de la Cruz Puc, a man who had been a maestro cantor (one of the former Mayan elite who had been trained by the Catholic priests to perform religious duties) found a small cross fastened to a tree.  He had heard the voice of God coming from this tree and it is said that this cross would speak words of encouragement to the struggling Mayans in their military uprising. In time, the number of miraculous crosses rose from one to three which is why, as in the shrine above and in others, three crosses are always shown.  De la Cruz claimed that these additional crosses had been found under a leaf near the original tree.  Trees were sacred to the Maya and crosses, themselves, pre-dated the coming of Christianity as symbols in the pre-hispanic Mayan world.

These three crosses were described as being dressed in a huipil, an embroidered blouse worn by Mayan women and a skirt.   The crosses below are from a present-day roadside shrine in Xcabil, Quintana Roo.  They are not "talking crosses" per se,  but are crosses dressed in the typical Mayan style similar to the way the "talking crosses" might have been attired.

The crosses below are on the altar of a church on Cozumel, which in pre-Columbian
times had been the site of an important Mayan shrine.  Again, these contemporary dressed Mayan crosses are not talking crosses or replicas of the ones from the Caste War period,  but are reflections of the Mayan customs that live on in the present day.

In Chan Santa Cruz, now called Felipe Carillo Puerto, a cult organized around the miraculous crosses developed.   A town grew up around the sanctuary to the crosses and around 1858 construction was begun, using the labor of captured whites, on a major shrine to house the Talking Cross and serve as the center of its cult. When the Mayans were finally defeated by the Mexican Army in 1901, the original talking cross, according to reports, was burned.

This building was originally called Balam Na, the House of the Jaguar, and in it were held the services of and sacrifices to the talking cross.  The cross was given water and food and today, in some places, there are still communicating objects (crosses included) that are fed and watered.  Today the Balam Na it is a Catholic church, named Iglesia de la Santa Cruz, the Church of the Holy Cross. A video of this church can be seen at http://www.youtube.com/watch?v=T1ecIGPKpI4. (link is clickable)


Notice the size and centrality of the cross in the altar area of the photo above. Among the followers of the Talking Cross in Caste War times, known as the Cruzob or Cruzoob,  the Cross itself became a saint and this has persisted into modern times. This church is called the Church of the Holy Cross and although it is  a purely Roman Catholic church, it bears the memory of past times and perhaps the importance of a different Cross. The population of Felipe Carillo Puerto is Mayan and certainly the significance of the Talking Cross has not been eradicated from memory.

During the period of the Caste War, because all white Mexicans had been driven out,  there were no Catholic priests (apart from an occasional captured one) in the zone controlled by the rebel Mayans.  Yet, components of Catholicism, in particular the saints (santos in Spanish),  had become an important in Mayan life because they were an essential component of their annual ritual cycle, harvest rituals in particular.  The
followers of the cross, the Cruzob Mayans, began their own church and ordained men, most likely the maestro cantors, the men trained by the Spanish as religious assistants who knew the Catholic ritual, to be priests.   The buildings of this church were homes of the cult of the cross that evolved from the original three "talking crosses".   The Cruzob and these sanctuaries still exist and the Mexican Government has legitimated them as well as  the institution of the Mayan church.  The major sanctuaries are at Tixcacal Guardia, Chancah Veracruz, Chumpón and Tulum and at each one there is this sign on the exterior showing  the government's endorsement:

As described earlier in this post, the original sanctuary of the Talking Cross in Chan Santa Cruz/ Felipe Carrillo Puerto (Balam Na) is now a Roman Catholic Church.  However, there is also a Mayan Sanctuary in the town and visiting it or any of the other sanctuaries is a fascinating step into another world.

Visitors absolutely must remove their shoes and hats before entering these sanctuaries and all photography is forbidden.  Notice the three crosses in the sign, symbolic of the original three talking crosses, which have come to be an emblem of the Mayan Church and the Cruzob. 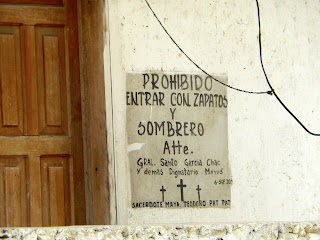 The church interior consists of a large open room with seating and a small enclosed area in the front called the Gloria.   The Gloria, basically, is the altar but is very private and in some sanctuaries obscured from view with a curtain.  At this sanctuary, the altar was open to view and in addition to other objects, there were three crosses dressed in the style of the crosses shown above, as well as a large crucifix with the figure of Jesus hanging on it.  There typically is also a flowered arch above the altar table and a smaller table with votive candles and offerings from participants.  The religious services in these sanctuaries are called missas (masses) and bear similarities to the Roman Catholic mass.  The Mayan priests consider themselves Catholic priests and in at least one of the sanctuaries, masses have been collaboratively celebrated by Roman Catholic and Mayan Catholic priests.