Spanish Conquest: A Battle of Images


While it is true that the conquest of the Americas was achieved through the Spaniard's superior fire-power, there were other things to consider.  The diseases that they brought to the New World, like smallpox, to which the indigenous had no immunity, resulted in huge epidemics that reduced their population.  Plus,  there was another piece of "heavy artillery" that, as you will see,  in the long run was probably the most potent.  I am referring to the religious images of the Spanish.

The Spanish were threatened by the images of the indigenous, such as these below photographed at the Museo de Antropologia in Mexico City.   Throughout the Conquest, it was routine for the Spanish to destroy such "idols" of those they subjugated. 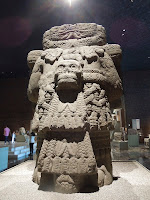 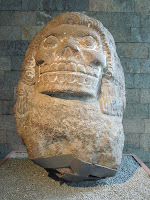 Why were images so important? Weren't they just inanimate objects?  The answer, as well shall see, is no.

The Spanish were very attached to their own images, to the point of carrying them into battle in the form of battle standards.  It was routine for the Spanish to carry a banner with the Virgin Mary in the form of Guadalupe of Extremadura who differs from the later and more widely known Guadalupe.  (This diversity of representations of Mary can get confusing and I will delve into them in a future post.) The Spanish also replaced indigenous images with their own, as was the case when Cortes put a statue of the Virgin in one of Montezuma's temples, thereby claiming it for his own.