Tihosuco, Quintana Roo: Church-Ruin of the Divine Child (with video)

Contemporary Mayan religion is poorly understood by most outsiders.  This was the case in a recent article in the NY Times about a new Mayan-language soap opera being filmed in the Quintana Roo town of Tihosuco.   In it the writer referred to the town's colonial era church as the ruins of a temple.  Although it is easy to see how the writer could have made this assumption, more research on his part would have been helpful.

The building he referenced is a ruin and in a way a Mayan ruin but not that of a temple. It is  the seeming ruin of the Church of the Divine Child and its former convent.  Completed in 1839, it had been the Franciscan center of the conversion effort in the region.  Less than ten years after its completion, it was destroyed at the start of the Caste War of the Yucatan (1847-1901) the long-lasting conflict between the Mayan insurgents and the government, those of Spanish descent.

However, walk into this building and you will soon see that it is not really a ruin; its interior catches you off guard.   Much of it  has been unexpectedly well-restored and the birds flying around the interior add a unique effect.  The video I shot in the church  shows this and shares the experience.  Here is the link to this video: https://www.youtube.com/watch?v=HayiDi27ufs

At the main altar, above the large crucifix, there is a small statue of the Divine Child whose church this is.  The statue on the altar's right is Mary and the other is of San Jose (St. Joseph) Jesus' father holding the Divine Child.  The interior restoration of the building is amazing, resulting, in my opinion, in one of the most striking churches in Mexico.

This church has magnificent murals  covering the walls of two sizable side chapels which are vibrant being recently painted by local Mayan artists; they are unmistakbly "folk art".  The signature on the murals indicates that they were painted by local artists named Max and Alberto in 2009.


The paintings are vibrant and can hold their own with the best art of their kind any where in Mexico. The Church is dedicated to the Divine Child, Jesus, and one of the mural-filled side chapels is dedicated to him, but there is an  equally significant chapel dedicated to  his mother Mary, in her advocation (form) of the Virgin of Guadalupe.

These murals from the chapel of the Divine Child show scenes from the life of Jesus from the time of his birth up to his resurrection. 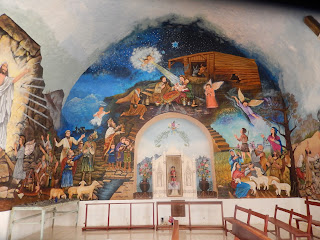 Here are the murals in the chapel of Guadalupe/Mary.


The sides of the church which were not seriously damaged in fighting show features of
Mexico's "fortress monasteries", in the crenellations visible on the top.


It is important to realize that the Church of the Divine Child in Tihosuco is a Mayan church attended by Mayan parishioners and that they were the ones who gave life to this ruin through the beautiful murals on its walls.  It is important for the reading public to have a fuller and more realistic appraisal of modern Mayan life as it is lived in the Yucatan, Quintana Roo and elsewhere.  Understanding that the religion there is not all about ancient Mayan ruins and temples is part of this.   Despite the colonial history of forced conversion the people there have developed a  attachment to Christianity, on their own terms with their own twists and understandings, as is the case throughout Mexico and the Latin American world.