The Day of the Dead, in Spanish Dia de los Muertos, may be the best-known Mexican holiday.  It is characterized by skeletons and death-themed sweets such as those seen
on the special altars or ofrendas. In contrast to the U.S. and Western Europe, in Mexican culture death is treated openly even to the point of joking about it.

The Day of the Day is actually the Days of the Dead (Dias de los Muertos), since the celebration includes October 31, All Hallows' Eve (Halloween), November 1 and November 2.  All three days are a part of triduum (three day celebration) in the Roman Catholic Church calendar and are celebrated in various forms throughout the world.  In Mexico, they have a special twist that comes from the inclusion of many pre-Hispanic elements in the observances.  The original Aztec celebration was dedicated to a goddess known as "The Lady of the Dead", but was not held on the same days as the Christian celebration.  After the Conquest, the Aztec celebration was moved and the two were merged into one celebration. In modern times, this goddess of the dead has been transformed into a figure known as "La Catrina" a woman who is a skeleton. The Halloween costume on the woman in the photo below is that of "La Catrina".


Halloween Night and the next night, November 1, people masquerade in costumes
and in San Cristobal de las Casas, Chiapas, where I was for the Day of the Dead this year, the whole city had a party-like atmosphere.  Many costumes were more conventional and typical of those seen in the U.S.

However many of the Day of the Dead celebrations in the indigenous towns Chiapas are much more exotic and unlike anything else in Mexico. Chiapas is in southwest Mexico and is the southernmost state of Mexico as well as having one of the largest indigenous populations in the country.   In Chiapas, as all over Mexico, the main idea of the Day of the Dead is that the souls of the deceased return to earth for the day to visit the living: November 1 is the day of return for the souls of children and November 2 is the day for return of adult souls.

In the Mayan community of Romerillo, which is about  fifteen minutes from the center of San Cristobal, the celebration of the Day of the Dead takes on a completely different tone.  The green and blue crosses, which are typical of the Mayan villages in Chiapas, are very tall in this town. (The crosses, themselves, will be the topic of a separate blog post.)  In the photo you can see that they are covered with yellow flowers- marigolds. The Aztecs called this flower cempasuchil and it was used to commemorate the dead and it continues to have this meaning throughout Mexico.  The belief is that the earthy colors of the marigold help guide the dead home.

In the Romerillo cemetery, there are planks of wood placed on the graves to make sure the souls stay within.  On the Day of the Dead, the planks are removed so that the souls can leave the graves and visit with family members.  These photos were taken on October 31, so the wooden planks were still in place. They would be removed the next day so the souls of the departed could visit with their families.


Shortly before the Day of the Dead, families gather in the cemeteries to clean and prepare the graves. These photos of Romerillo were taken on Halloween Day 2013 and at that time the cemetery already had a festive feeling.  Traditional dances (Dance of the Jaguar and the Serpent)  by men dressed in ceremonial clothing, were being performed and people were selling various sorts of food there in the cemetery. 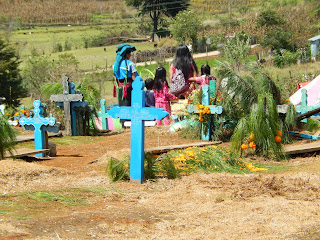 Food for the dead is put on the graves and on the ofrendas to provide nourishment for them on their visit home.  Very often you will see bottles of coke or other beverages on the graves as well as tamales and other foods.  It is said that the dead eat the essence of the food and that it does not taste the same to living humans after the departed have "eaten" it.


On the same day in Tenejapa, a Mayan town, about 35 minutes outside of San Cristóbal known for its weaving, the local school had constructed ofrendas.  All throughout Mexico, it is traditional for schools build ofrendas for the Dia de los Muertos.

Normally indigenous people in Chiapas are reluctant to have photos taken and in many places, photos are forbidden.  But here, in Tenejapa, the principal of the school, whom we encountered, invited us to take as many photos as we wanted.  Some of the students were in the traditional dress of the area.


The next group of photos were taken on November 2 in San Juan Chamula, a very traditional Mayan community about 20 minutes outside of San Cristóba and they clearly show what is central to Dia de los Muertos: festivity and family.  Dia de los Muertos, is the time when families "visit" with their deceased members through remembering them- putting out their favorite foods, telling stories about them, mourning them and in other ways.

On November 2, the cemetery in San Juan Chamula, which is located next to the old church ruin of St. Sebastian (it was destroyed in a fire), was a lively place. Family groups gathered round laughing, singing and in some cases, mourning profoundly.  The overall atmosphere, though, was one of joy and not sadness; Dia de los Muertos is a time for joyful reunion with lost loved ones.


As can be seen in this photo, the people in Chamula were all wearing traditional dress.
The wool shirt the man wears is for special occasions and is woven by the women, as are the black skirts that they themselves wear,  from the wool of sheep that are raised in the community.

Here the graves are decorated with a combination of pine boughs and marigolds.  In the church in Chamula during the Dia de los Muertos, the entire floor was covered with pine needles, which are said to represent eternal life.

In the next photo cans of beer can be seen on the grave and it is not unusual to see various forms of alcoholic beverages on graves, along with Coca Cola and foods. In Chamula the celebrators were drinking pox, the traditional alcohol of Chiapas that is made from sugar cane and is something like rum.  Drinking pox is a part of the traditional religious culture and is a part of all celebrations.  Our guide was a friend of the local people and he was obliged to drink a graveside toast with them.  Let's say that everyone was very happily feeling the effects of the pox.

Some of the graves had small fires burning next to them, so that the smoke could guide the souls of the dead to the place.  Another way that souls are guided back to visit is through the loud ringing of church bells in the center of the town.  In the photo below, people are lined up to ring the bells to call the souls of their deceased family members back to earth.  Each ring of the bell calls one soul back, so each person would ring the bells as many times as he had souls that needed to return.