The person in the photo above may look like a street thug, but he actually is a participant in one of the most unique Holy Week events in Nicaragua and you will not read about this event in Nicaragua guide-books. Nandaime hosts one of the most original interpretations of Holy Week rituals on its streets  the Wednesday before Easter, Holy Wednesday. This day, to all appearances, looked like a normal day in this small town in the Southwest of Nicaragua town about a half-hour outside of the lovely colonial city of Granada.

The town was quiet, but there was an atmosphere of anticipation and people were lined up along the steers waiting for something. 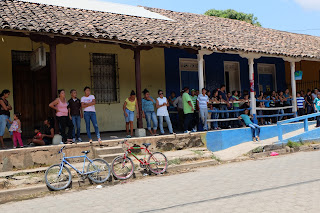 One tour brochure had stated that at Noon on Holy Wednesday, the church bells ring and "people start making a lot of noise". It turned out that the noise was a part of something a whole lot bigger and extremely interesting.

Above is the town's church, peaceful with its courtyard empty.  Yet, the rest of Nandaime was anything but peaceful that day.  Minutes before, at noon, the church bells had rung
and a crowd of costumed people, mostly young, had taken off from its courtyard brandishing whips. One can be seen below taking a rest.  The crowd's objective was to hit (and I can personally attest, not lightly) anyone one in their path or anyone they could lay hands on.

The armed horde made two rounds of the town's streets streets and at 12:30 sharp they returned to the church yard and it was all over.  Costumes were removed and there was no more whipping.  The whole event lasted exactly one half hour and despite the seeming free-for-all atmosphere, was very structured and ritualized.

Self-whipping has existed within various religious groups since ancient times as a personal practice of penance for sins.  Around the 11th century in Europe it became more wide-spread and popular as a form of penance within the Catholic church and was taken up by radical factions within the church, later to be condemned by the church as heretical and banned by many rulers.  These groups of flagellants in Medieval Europe would march en masse through the cities whipping themselves, and bleeding as a public show of piety.  It was a popular movement that cropped up throughout Europe particularly in times of famine or plague; it was believed that self-mortification purged sins.

The resemblance of this Nandaime participant to the Medieval flagellant above is unmistakeable, with the exception that he had not been whipping himself, but everyone else he could get to. Despite the excitement and laughter, the roots of this celebration are quite profound.

On a much smaller scale, processions of hooded flagellants are still a feature in Mediterranean Catholic countries and in Latin America. Penitential practices are often tied to the church season of Lent, of which Holy Week is a part. Nowadays they are more often symbolic than the out and out self-mortification of former times; the Holy Wednesday event in Nandaime is one such instance. Likely, flagellation was once practiced more openly in the area, and the low-level, time-limited whipping that is a part of Holy Wednesday is a cultural memory of these events.

Nandaime's Holy Wednesday whipping spree is an accepted part of the towns' culture and more or less taken for granted by the people there as a fun event.  Everyone seems to have a lot of fun with it despite the occasional painful hit.  Although it may look like wanton aggression to the visitor, it is very ritualized and religious in nature.  It begins in at the church with church bells and ends there as well.

Holy Wednesday in Nandaime is an enactment of the ancient flagellatory practices with a twist- the participants are not whipping themselves, as in the old times, but are whipping everyone else; everyone, willing or not, gets to participate in the penitential activity.   Holy Wednesday in Nandaime is both a remembrance of the old penitential practices and a modern parody of them that stands the old practice of self-flagellation on its head. It is unclear whether or not the mostly young participants in the Holy Wednesday melee are aware of its origins.